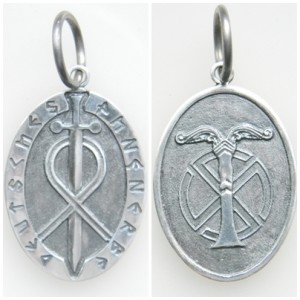 The Ahnenerbe was a Nazi German think tank that promoted itself as a “study society for Intellectual Ancient History.” Founded on July 1, 1935, by Heinrich Himmler, Herman Wirth, and Richard Walther Darr, the Ahnenerbe’s goal was to research the anthropological and cultural history of the Aryan race, and later to experiment and launch voyages with the intent of proving that prehistoric and mythological Nordic populations had once ruled the world.

Be the first to review “Ahnenerbe silver pendant” Click here to cancel reply.