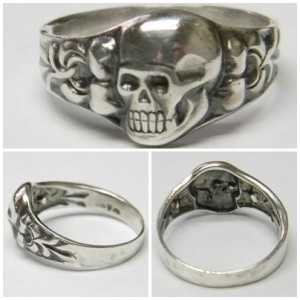 Skulls are a timeless fashion symbol we see in clothing, accessories, and jewelry pieces. Skulls are also prominent skin art for the brave and those who choose to explore the dark and rough side of their personalities. Though a common design, it exudes elegance and power like no other. Skulls and bones are common designs that have successfully made their place in modern fashion. Skull jewelry is especially popular among bikers who like to portray the rough image
SS-Ehrenring, unofficially called Totenkopf ring (“Death’s Head Ring”), was an award of Heinrich Himmler’s Schutzstaffel (SS).
Totenkopf Ring Der ϟϟ
Potency of imagery in SS brotherhood was not lost on its leader, Heinrich Himmler, and was clearly in his mind when early in life of organization he instituted Ring der SS (April 1934). Totenkopf ring prominently featured runes and mystical symbols of SS, symbols that played a significant role in magnifying the veil of obscurity and mystique that covered organization. The award was both a product of, and a source nourishment to hint of arrogance that surrounds all military units that consider themselves elite. SS Totenkopf ring der SS ring was not a National decoration and could not be earned per say.
More abut swastika:
The swastika has an extensive history. It was used at least 5,000 years before Adolf Hitler designed the Nazi flag. The word swastika comes from the Sanskrit svastika, which means “good fortune” or “well-being.” The motif (a hooked cross) appears to have first been used in Neolithic Eurasia, perhaps representing the movement of the sun through the sky. To this day it is a sacred symbol in Hinduism, Buddhism, Jainism, and Odinism. It is a common sight on temples or houses in India or Indonesia. Swastikas also have an ancient history in Europe, appearing on artifacts from pre-Christian European cultures.
In the beginning of the twentieth century the swastika was widely used in Europe. It had numerous meanings, the most common being a symbol of good luck and auspiciousness. However, the work of Schliemann soon was taken up by völkisch movements, for whom the swastika was a symbol of “Aryan identity” and German nationalist pride.
This conjecture of Aryan cultural descent of the German people is likely one of the main reasons why the Nazi party formally adopted the swastika or Hakenkreuz (Ger., hooked cross) as its symbol in 1920.