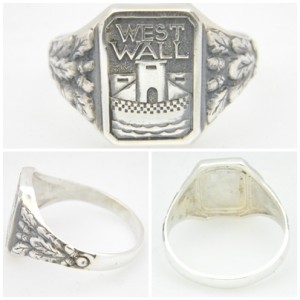 The original Siegfried line (German: Siegfriedstellung) was a line of defensive forts and tank defenses built by Germany as a section of the Hindenburg Line 1916–1917 in northern France during World War I. However, in English, Siegfried line more commonly refers to the similar World War II defensive line, built during the 1930s, opposite the French Maginot Line, which served a corresponding purpose. The Germans themselves called this the Westwall, but the Allies renamed it after the First World War line. This article deals with this second Siegfried line. The Siegfried Line was a defence system stretching more than 630 km (390 mi) with more than 18,000 bunkers, tunnels and tank traps. It went from Kleve on the border with the Netherlands, along the western border of the old German Empire as far as the town of Weil am Rhein on the border to Switzerland. More with propaganda in mind than for any strategic reason, Adolf Hitler planned the line from 1936 and had it built between 1938 and 1940. This was after the Nazis had broken the Treaty of Versailles and the Locarno Treaties by remilitarizing the Rhineland in 1936.